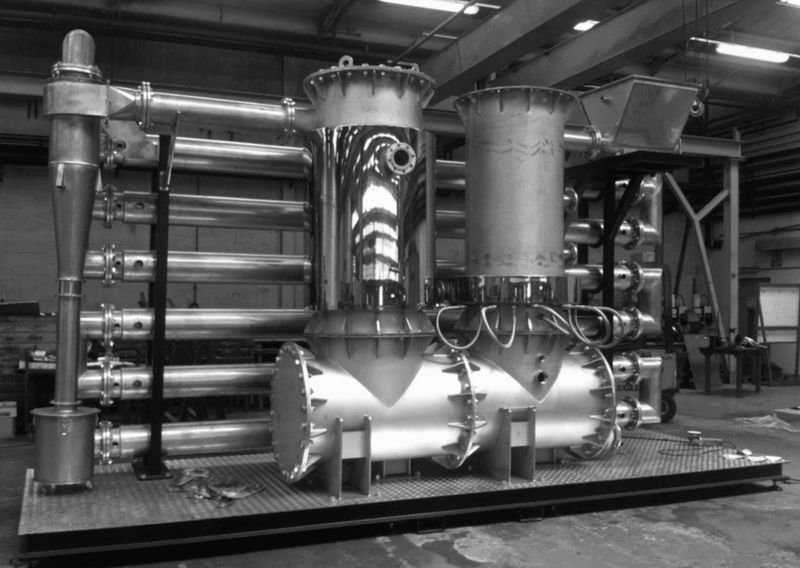 Sustainable development and the need for clean energy often are a battlefield as it combines contrasting interests. It is taking that into consideration that we have developed a system capable of cogenerating, starting from virgin wood resulting from forest management, electricity and heat without producing air pollution. A system that, thanks to the small obstruction, can be placed also in the vicinity of wooded areas, relocating the production of energy and guaranteeing added value to all the areassearching for new development, as well as a significant reduction in transport costs and supply.

The plant is designed for a continuous 24-hour service 24, and is equipped with the innovative technology of pyrogasification based on the construction technique of semplified dual-stage gas that uses air as an fluidizing component (Patent no. 0001415899). This new patented technology has enabled us to re-start wood biomass systems of other companies and to design and implement our complete plant. The organic material (the wood) is transformed first in a raw substance and saturated with powder, the syngas; subsequently it is cooled and purified, up to be optimal to activate gas engines. The whole plant produces no emission but the drains of the engines, whose values fall within the prescribed limits of Law reported on the DL 152/06. Especially reduced is the value of fine dust emissions PM10, up to 20 times lower than that of a typical pellet boiler of equal thermal power.
The maximum size of available plant is of 200 kW; the organic material consumption, 35-37% humidity (the plant dries autonomously wood at 10- 12%), is about 1,500 tons per year for the 200 kW system. The modular design facilitates installation and maintenance, while an insurance guarantee eliminates the risk of malfunctions.

The cogeneration plant described herein falls between the plants subsidized by the Ministerial Decree of 6 July 2012 and by the subsequent Decree of the Ministry of Development of 23 June 2016. The decrees determine the method of subsidizing the production of electricity from plants powered by renewable sources ; the expected subsidy has aduration of 20 years and currently has a basic subsiding tariff (Tb) of 246 €/ MWh (DMiSE of 23 June 2016). For plants that come into operation by 30 June 2017 shall be also provided for any awards (Pr), such as reducingemissions (30 € / MWh) high-efficiency cogeneration (10 € / MWh), use thermal energy for district heating (40 € / MWh) (DM July 6, 2012).

The subsidies are recognized on the net production of electricity led from the plant. The net production injected is the value between the net output of the plant and the self-consumption (set by the DM July 6, 2012 as a fixed value to 17%). The plant has an increasingly self-consumption in less than 17% and it is possible for this use in own and / or dispose of the portion of the electrical energy not subject to subsidy.

Process description Principle of operation of the pyrolysis reactor, Pat. 0001415899

The innovative part of the entire system is the pyrolysis reactor, which has enabled us to reactivate inactive and / or malfunctioning plants and can design the complete plant. The pyrogasification used is of the type commonly referred to as "down-draft". This type of pyrogasification consists of a closed tank in slight depression in which wood chips enter from above. Both the product gas (commonly referred to as syngas) that the ashes produced out from the bottom of the reactor.

The Cogeneration plant consists of:

Simplified two-stage pyrogasification producer capable of producing syngas in sufficient quantities to power an electric generator for about 200 kWe and 200 kW thermal systems;
Filtration system, cooling and cleaning of the produced gas;

MV/LV transformer into resin from 100 kVA; Control Panel of pyrogasification

control panel and parallel panel of the cogenerator made as per 0-16 regulations module and complete with tax counters;